This is a Sanskrit Proverb and the meaning is as follows, we always care about our Atman, we also care about our life partner and the wealth. Richness can be repossessed, but we always fail to realize one important thing that, we do not get this body again in this particular life.

Now to understand the message behind this proverb, we need to understand certain theories deduced by ‘Sanatan Vaidic Religion’ which is popularly known as’ Hindu Religion’, which says that, the human body is divided into two parts namely ‘Stool’ and ‘Sookshm’. 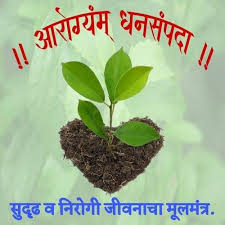 Medical Science may define death as a mechanical phenomenon i.e the moment the heart stops functioning a person dies, but the fact is that every person is allotted a definite number of breaths by that almighty Parbramhan for a span of hundred years. Hence every breath that we take, reduces the total number of breaths allotted to us by that almighty God, which means we are here on this earth because God wants the Atman within us to carry out good acts, and deeds in the society and accumulate Dharm so that you can get mukti. When we say YOU here means Atman within us. But Atman cannot carry out any acts independently because he is intangible, and be able to carry out the necessary action the God grants him the Stool Kaya with the help of which the Ataman carries out the necessary spiritual and Material activities. This proves that the ‘STOOL’ or the Human body is as important as the Atman is, but unfortunately, we care about a dam about our Health conditions. The majority of us get addicted to different habits and end up with a nonperforming lifestyle. The other reason as to why a human being is so negligent about the health is that he got the body free of cost. we have not taken any trouble to possess it, but to make one understand the significance of Good Health, Hindu Religion advocates the concept of ‘SANSKAR’

Now let us make an attempt to understand what SANSKAR is all about.

As we discussed above the Atman is a foreigner to the human body, where one is tangible and the other one is intangible, but so long as there is no parity between the two, it would be very difficult to make any Spiritual or Material achievement. In other words, an improper synchronization between ‘Stool’ and Sookhm ,i.e. Atman and Body shall yield no constructive results, and overcome this disparity between Atman and Body the concept of SANSKAR introduced which will ensure the necessary synchronization between the two. The best example of effective SANSKAR according to the Hindu Religion’ is fasting until one has taken bath in the morning regularly. Now some might question as to how bathing will bring about synchronization between Atman and Body, and the answer is when you observe the concept of Fasting in the morning until you have taken a bath on a regular basis the Atman develops belongingness towards the body, and if someone insists you to eat something before you have had a bath the atman refuses. Now is it clear that all the way we bathed the body and not Ataman but it is the Atman inside the body refuses to do any act which it believes is against its belief?

Similarly, the majority of such theories put forward by Hindu Religion through ‘SANSKAR’ advocate the importance of healthy living and thereby attain the spiritual heights.

Hindu Religion advocates KAPILA DARSHAN in the morning, which is pure to meant to protect your Eyes and lead a very healthy life. The ritual advocates, when we get up in the morning it is advisable not to expose your eyes to bright light that may harm your eyes, which is very precious in the entire human body, instead, perform ‘KAPILA DARSHNAM’, now some might feel how does ‘ KAPILA DARSHAN’ is hygienic for eyes and the answer is KAPILA means ‘BLACK COW’ so when we get up from the bed and have a look at a black colored cow for some time, your eyeballs will get acquainted with the light around you and will be saved from any eye damage that could be caused due to high-intensity bright light around us. Is it not Scientific.?

Now to add to it, if we consider another ritual followed in Hindu Religion, i.e. Ekadashi, which has both spiritual and material applications. The term Ekadash means Eleven and as we all know that the human body consists of Eleven organs, namely Five are’ Karmendriyas’, Five ‘Dnyanendriyas’, and one reproductive organ. The religious theories recommend resting these eleven organs twice a month for their better performances in the longer span of life i.e. on the eleventh day of every ‘Paksh’, the term ‘Paksh’ means the span of fifteen days from ‘Amavasye’ to ‘Poornima’ and vice-e-versa. i.e .’Shukl’ and ‘Krishn’ Paksh. The reason being, it is noticed that on every eleventh day of both each Paksha the atmospheric Temperature and Pressure would have gone a drastic change as a result the digestive system gets adversely affected.

Spiritually, on the day of ‘Ekadashi’ Hindus observe Fasting which is called ‘Upavas’. But surprisingly ‘Upavas’ does not mean fasting, but it means, being in the closest vicinity of ‘PARABRAM’ who is none other than’ Lord Vishnu’, and when you are in the closest vicinity of God it is believed that the Hunger and Sleep will stay away from human being which automatically results into fasting.

The concept of ‘Snaskar’ can also be justified by coating an example of the Purification of Raw gold. As we all know that the gold extracted from the mine is Impure and which calls for purification, to be able to be used as an ornament, so also this human being. To be able to achieve ‘Mukti’ one needs to purify himself internally and externally, in other words ‘KAYA,VACHA,MANASA,’ and that is one of the purposes of ‘Sanskar’.

Likewise, there are a lot of such rituals in the Hindu Religion, which advocate the importance of Good Health in achieving spiritual goals.

The bottom line is the way it is said in English a Healthy Mind in a Healthy body but have a Healthy mind one has to follow the path of ‘Sanskara’ by the virtue of which every human being and achieve both Spiritual and Material goals in life.

Exposure to cold detrimental to the compromised heart – Dr. Richard...